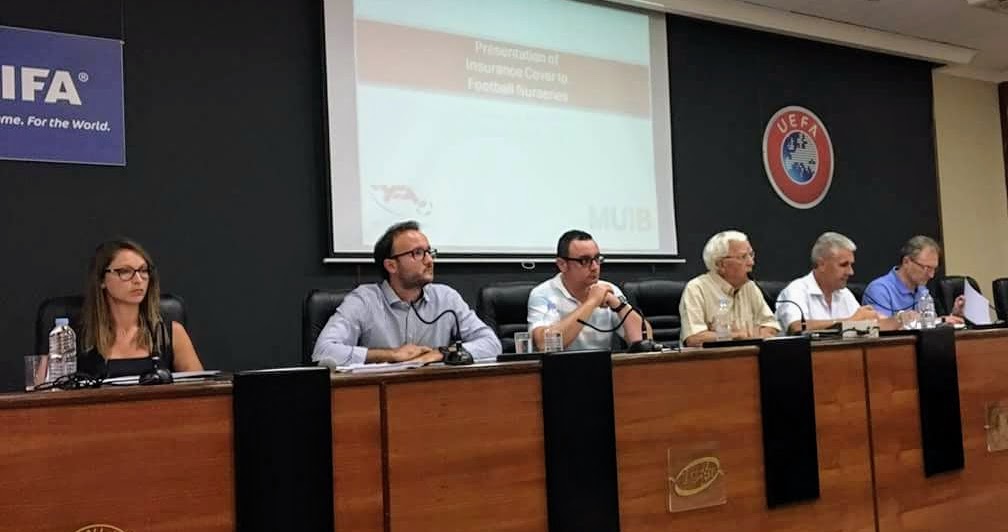 The Youth FA, in the presence of 40 affiliated nurseries, has launched an innovative concept of an insurance policy cover to all teams, including the players, technical staff and administrators participating in their U17 and U15 leagues as well as the U13 Inħobb il-Futbol Events.  As from this season (2017 – 2018), it will be obligatory for all participating teams in these categories to be covered with an insurance policy.  All other age categories can also be covered with this insurance policy, but this is on a voluntary basis.

Fr. Hilary Tagliaferro, revealed that the YFA had been looking at this project for years, but the prices quoted were always too appalling. After discussing this issue with our Scottish counterparts during the Erasmus+ project, new optimism had emerged and a partner (MelitaUnipol Insurance Brokers) was found.  The YFA President concluded his speech by appealing to all nurseries to embrace this new project, as it would give peace of mind and protection to all those involved in local youth football.

Joe Micallef explained that this insurance policy proposal presented to the nurseries today has developed over several meetings, negotiations and discussions, and that although it may not be perfect, it is an excellent starting point and was looking forward to receive feedback from the nurseries administrators to ensure a better policy cover in the coming seasons.  The YFA General Secretary concluded his speech by stating: “Today history was made, not just for the Youth FA and its nurseries, but for sports in general in our country, as we are sure that other sports associations will follow suit and introduce sports insurance cover.

MelitaUnipol General Manager, Nicky Warrington, gave a detailed presentation of the insurance cover to the nursery representatives, with special attention given to the personal accident and the liability insurance.  YFA Vice president, Robert Attard and Susanna Pace from the Commercial Department of MUIB were also present.