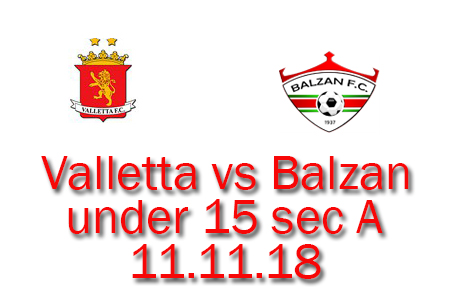 The Valletta youngsters were the better outfit in this game by creating more occasions than Balzan. After a balanced first period Valletta dominated proceedings after the resumption and following this game they now share top spot together with Pieta and Paola Hibs on 7 points from 3 games while Balzan are still pointless also from 3 games.

Balzan reacted as they mounted three actions. Craig Borg released Gabriel Farrugia on the right flank and following his cross in the area the ball hit the bar from a header by Samuel Berman with Valletta keeper Aidan Pisnai beaten. Miguel Tagliaferro was fouled in midfield and the ball was cleared to a corner from the free kick by Borg and from the flag kick by Liam Azzopardi the ball was headed away and after another Azzopardi flag kick Demicoli headed slightly over the bar, at the other end Luke St John released Micallef in the area and Buttigieg foiled him with a timely sortie.

In a Balzan action Gianluca Cacciatore was fouled outside the area and Pisani saved in two attempts the free kick by Borg. Valletta then won a free kick on the left flank as Klose Azzopardi Conti was fouled and Miguel Azzopardi missed the far post from the free kick.

The last two actions before the break were created by Valletta. A well-taken flag kick by Alexei Borg was headed away with difficulty and Letherby served Micallef with a through ball in the area and a defender cleared the ball to a corner.

Six minutes after restart Valletta scored through Micallef after he was put through in the area by substitute Gabriel Desira but the point was disallowed for off side.

In the 44th minute Valletta opened the score when Letherby was fouled on the right edge of the area and Javier Farrugia scored direct from the free kick with a hard low drive and in another Valletta action Keiran Scicluna dribbled past two opponents on the right flank and the ball was headed away following his high cross in the area.

Two actions were then created by Balzan. Substitute Kurt Attard served substitute Julian Gauci in the area and Pisani foiled him with a timely sortie and substitute Gabriel Farrugia dribbled past an opponent on the edge of the area and Pisani saved his shot in two attempts and was injured in the action and had to be substituted by Jacob Mangion and this was in the 57th minute, from these columns I wish him a speedy recovery.

Valletta kept pressing until the end. Desira released Scicluna on the right edge of the area and after he was fouled the ball was cleared away with difficulty from the free kick by Farrugia. A flag kick by Borg created havoc in Balzan’s area and the ball was cleared away with difficulty and in the 5th minute of added time Valletta doubled their lead when Micallef served Letherby with a cross in the area from the left flank and as he was tripped by a defender Deacon Abela made no mistake from the resultant penalty with a hard low drive.