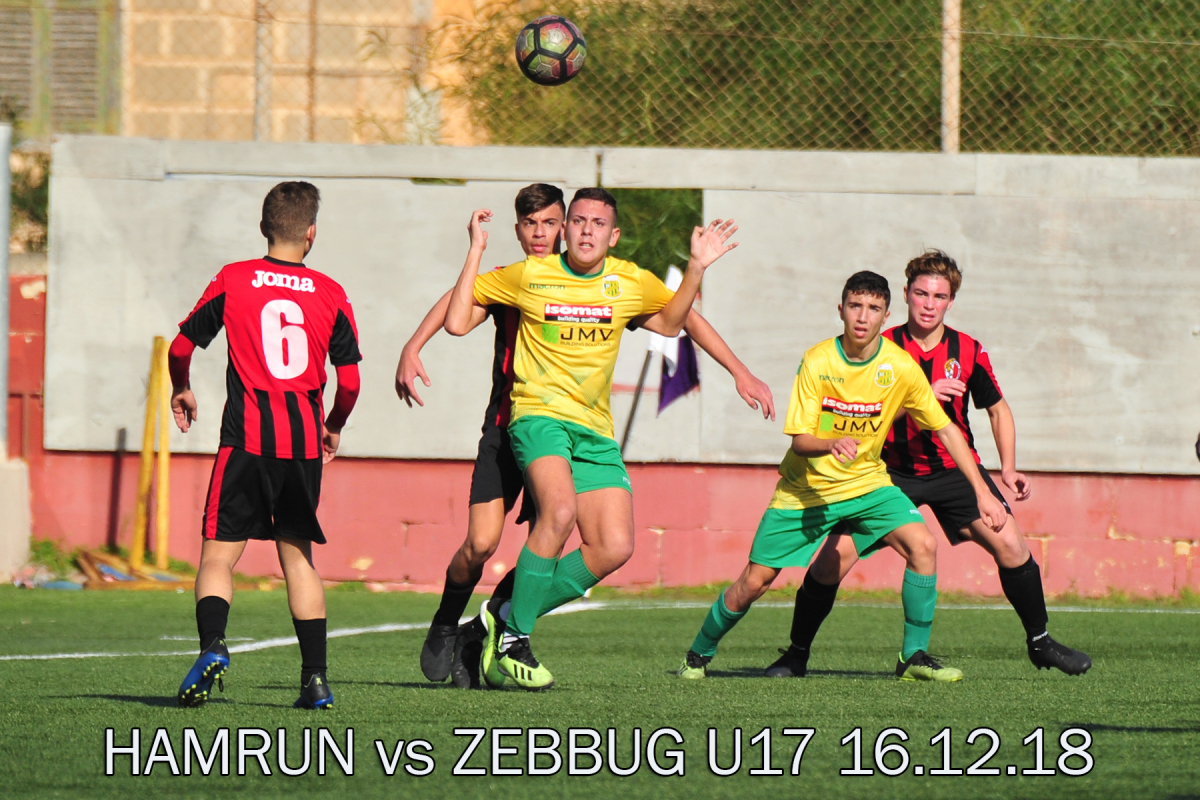 Under 17 KnockOut Second Round

A very hard-fought game and played at a very fast pace. The first period was dominated by Ħamrun and after the resumption it was a balanced affair.

The game was only four minutes old and Ħamrun were denied by the wood work. Wayne Seracino was fouled outside the area and from the free kick by Redeemer Muscat the ball thumped the bar with Żebbuġ keeper Luca Baldacchino beaten and the ball was cleared away, and in an action by Żebbuġ Andrea Balzan served Shamison Buttigieg with a square pass and Ħamrun keeper Matthias Debono saved his distant shot.

In another Ħamrun action Seracino was fouled on the left flank and the ball was cleared to a corner from the free kick by Nikolai Micallef.

Two actions were then created by Żebbuġ. Buttigieg was fouled outside the area and the ball was cleared to a corner following the free kick by Stephen Gatt and Mikele Vella was fouled on the left flank and after Gatt’s free kick the ball was headed away.

Ħamrun regained the initiative and mounted all the actions up to the half time whistle. Matthew Mifsud released Nikolai Micallef on the left flank who then served Xylon Portelli with a cross in the area and from a very ideal position he miscued his shot and a good opportunity was lost.

Jacob Brincat was fouled on the right flank and Micallef missed the far post by inches from the free kick and Micallef then dribbled past an opponent outside the area and after his hard rising shot Baldacchino was forced to tip the ball over the bar and in the last action Miguel Tabone was fouled outside the area and after the free kick by Muscat, Portelli headed slightly over the bar.

Żebbuġ created the first action after the break as Jayden Camilleri served Buttigieg with a through ball in the area and Ħamrun keeper Matthias Debono foiled him with a timely sortie , at the other end Portelli served Jamie Cutajar with a square pass and Baldacchino saved his distant shot.

Two actions were then created by Żebbuġ. Kyle Tanti was fouled on the right flank and Buttigieg missed the near post from the free kick and Camilleri served Gianluca Tanti with a through ball on the left flank and Debono neutralised the ball following his cross in the area, and in a Ħamrun action Seracino was fouled outside the area and after Portelli served substitute Jamie Spiteri with a short pass from the free kick a defednder cleared the ball to a corner following his hard drive from the distance.

As the game ended all sqaure penalties had to be taken to decide the winner.

Ħamrun scored only one by Zvake Azzopardi and Baldacchino saved on Micallef and on Muscat and Owen Cassar drove out, while Żebbuġ scored three through Gianluca Tanti, Shamison Buttigieg and Adam Abela.