San Ġwann make sure in first half – ARTICLE BY VICTOR CIANGURA, PHOTO SUPPLIED BY OUR OFFICIAL PHOTOGRAPHER, STEPHEN GATT. 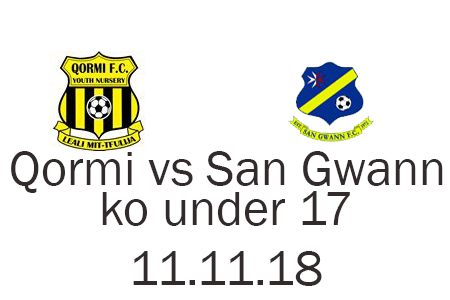 13 Nov San Ġwann make sure in first half – ARTICLE BY VICTOR CIANGURA, PHOTO SUPPLIED BY OUR OFFICIAL PHOTOGRAPHER, STEPHEN GATT.

Under 17 Knock Out First Round

San Ġwann qualified for the next round after beating Qormi and fully deserved the victory as they were the better outfit during the whole 90 minutes as they created more occasions than Qormi.

The game was only four minutes old when San Ġwann opened the score. Joseph Attard served Andrea Zammit with a through ball on the right flank and a defender cleared the ball to a corner and after Zammit’s flag kick Luke Musu scored with a header from inside the area past qormi keeper Krassimir Zammit.

Another two actions were created by San Ġwann. Cody Grech entered the area after dribbling past an opponent and Zammit saved his shot in two attempts and after a Zammit flag kick the ball was cleared from over the line from a shot by Attard.

In the first action by Qormi Juan Gauci was fouled in midfield and after the free kick by Nigel Aquilina San Ġwann keeper Miguel Xerri saved a header by Denilson Borg, at the other end Jake Grech served Falzon in the area and Zammit foiled him with a timely sortie.

San Ġwann doubled their lead in the 26th minute after a choral move between three players. Attard released Zammit on the left flank who then crossed the ball in the area to Nathan S   Sultana who scored with a rising shot and the score became 3-0 eight minutes later when Falzon served Zammit in the area who netted with a hard low drive.

Two more actions were created by San Ġwann before the half time whistle. Zammit served Sultana with a high cross in the area and keeper Zammit neutralised the ball and a Zammit flag kick was cleared to another corner.

In San Ġwann’s first action after the resumption Falzon was fouled outside the area and after Zammit’s free kick Owen Spiteri missed the upright from inside the area amd in an action by Qormi Borg was fouled in midfield and the ball was cleared away following the free kick by Nigel Aquilina.

On the hour we witnessed an unfortunate incident. In a San Ġwann action Cody Grech served Sultana with a through ball in the area and as keeper Zammit rushed out of his charge to narrow the angle he collided with Sultana and was injured. He had to be stretchered off the field and rushed to hospital and from these columns I wish him a speedy recovery.

In a Qormi action substitute Omar Borg was foluled in midfield and Jacob Mizzi drove well off target from the free kick. The pressing from San Ġwann resumed.After a run down the left flank by Cody Grech he crossed the ball in the area to Zammit but the drove over the bar . Substitute Byron Madu served Luke Musu in the area who scored with a rising shot but the point was disallowed for off side.

Qormi then mounted the last action before the end when Carlos Debattistsa was fouled on the right edge of the area and after the free kick by substitute Omar Borg created havoc the ball was cleared away.