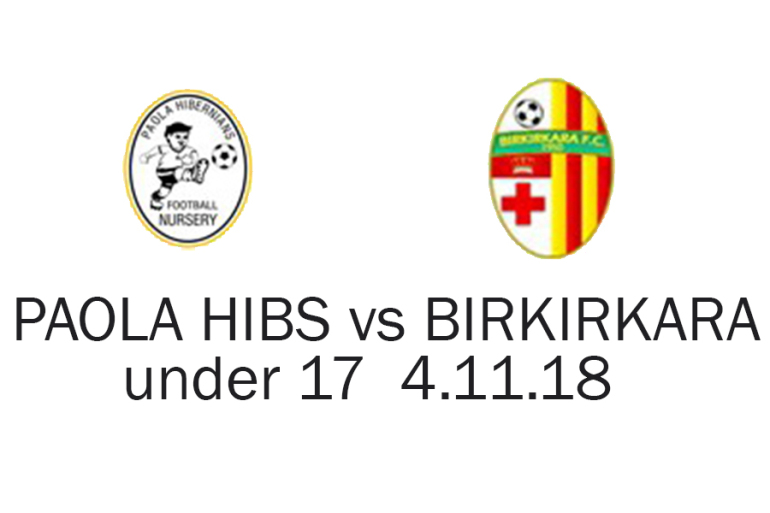 A large crowd watched this game at the Mosta Ground. Paola Hibs won the Group on 10 points from 4 games while Birkirkara finished in second place on 7 points from same number of games. Young referee Joanna Vassallo had good control of the game.

Paola created the first action as James Vella was fouled on the right flank and after the free kick by Larson Borg, Brite Ihuomah headed slightly out from inside the area.

In Paola’s next action in the 14th minute they took the lead when Larson Borg served Jamie Carbone with a through ball on the right edge of the area who after out-speeding a defender entered the area and scored with a hard diagonal drive past Birkirkara keeper Jake Schiavone.

In a reaction by Birkirkara they mounted two actions. Mallia was fouled just outside the area and from the same player’s free kick Paola keeper Dwayne Loffreda saved the ball with a diving save in two attempts and Mallia served Messina with a through ball on the right flank and a defender cleared the ball to a corner.

The last actions before the break were created by Paola. James Vella released Carbone on the right flank who entered the area after out-speeding an opponent and Schiavone denied him with a save in two attempts and Ihuomah served James Vella with a through ball in the area and Schiavone foiled him with a timely sortie as he dived at his feet and smothered the ball.

The first action after the resumption was created by Birkirkara. Mallia released Angelo Migliore on the right flank who then served Messina on the edge of the area and Loffreda saved his shot. The Paolites reacted. James Vella was fouled on the right edge of the area and following the free kick by Glen Mifsud, Tristen Sultana missed the upright with a header from inside the area and Carbone dribbled past an opponent on the left flank who then served Ihuomah with a cross in the area and he missed the upright from his hard drive.

In the 55th minute Birkirkara forward Migliore committed the miss-of-the-match when he skied the ball from two metres with only Loffreda to beat after a well-taken free kick by Nikolai Farrugia Cross.

In the 78th minute the Paolites doubled their lead through Carbone who dribbled past an opponent on the left edge of the area and after advancing scored with a hard low drive and five minutes later the score becmae 3-0 after a choral move between three players. Substitute Morientes Muscat served Borg with a through ball who then released Bondin in the area and scored with a low shot.

Five minutes before the end of normal time Birkirkara players Adam Camilleri and Calvin Mallia were shown the red card after a second booking following a scuffle with two Paola players.