MFA and YFA celebrate football for everyone 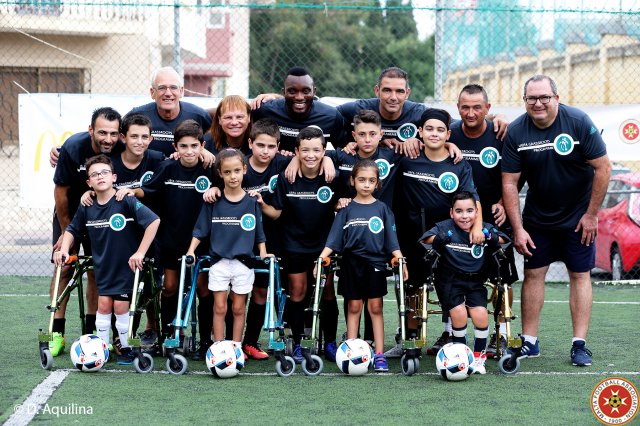 23 Sep MFA and YFA celebrate football for everyone

In line with the European Commission’s European Week of Sport, UEFA and its member associations celebrate UEFA Grassroots Week. As one of these associations, Malta had numerous activities organized during the week, from the 10th till the 17th of September 2016.The Malta Football Association (MFA) Grassroots Department at the Technical Centre and the Youth Football Association (YFA) facilitated and encouraged participation in all forms of football.

The activities kicked off with the Women’s Super Cup, where in a historic first, the children from Frame Football Malta (FFM) accompanied the players and referees as player escorts for the game. It was a special occasion for everyone involved, in particular for the FFM children who after the match, were surprised by Birkirkara FC players who presented them their medals. It was the cherry on the cake for a memorable evening, underlining that football is not only a sports activity, but a tool for inclusion.

The MFA and YFA also joined forces with the Armed Forces of Malta to support the Physiotherapy department at the Child Development and Assessment Unit (C.D.A.U)’s activity for this year’s World Physiotherapy Day,also coinciding with UEFA Grassroots Week. During the day, a number of physical and fun activities such as fun races, obstacle courses and football activities were organized for the attending children. A notable factor to underline was that there was also collaboration from MFA staff, including coach Noel Turner who temporarily replaced his usual job as head coach of the Under 16 and assistant coach of the Under 21 National Teams, for a morning by happily lending a hand to the physiotherapists in their activities.

Hamrun Spartans F.C. Youth Nursery hosted FFM on Saturday 17th as the closing event of the local UEFA Grassroots Week events. The event at Hamrun involved children from FFM who together with Hamrun Nursery Under 12 players, had a training session run by Hamrun Spartans coaches, and also Hamrun Spartans’player, Saturday Nanapere.

The local Football Entities message is that football is for everyone and strives for social inclusion as well as show that impairments cannot stop anyone from playing football.

This week of activities also served as a catalyst for the Nursery of Hamrun Spartans in order to strike an agreement with FFM, with whom they will be joining forces in the interest of holding similar sessions every Saturday.

The MFA and YFA thank all their collaborators who helped to organize a successful UEFA Grassroots week. All collaborators were awarded footballs and all the participating children given T-Shirts provided by UEFA.