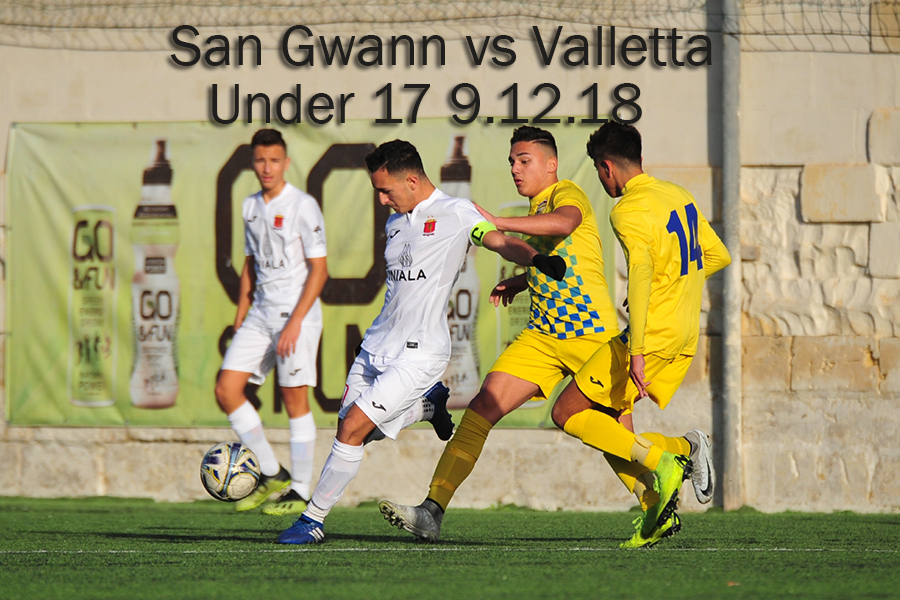 The information, choice of match and views set out in report are those of the author and do not necessarily reflect the official opinion of the Youth FA.

A very keen game played at a very fast pace and was watched by a sizeable crowd at the Sirens Ground. After both teams have played 4 games Valletta are in joint third placing with St Andrew on 7 points while San Ġwann are on 5 points.

In the 7th minute San Ġwann opened the score when Madu dribbled past an opponent on the right flank and after entering the area he scored with a hard rising shot past Valletta keeper Anson Saliba.

Valletta enjoyed the lion’s share of exchanges after the resumption and the first action came from San Ġwann as Madu served Cody Grech in the area and Saliba foiled him with a timely sortie. Chetcuti served Pulis on the right flank and after advancing San Ġwann keeper Agius saved his shot to a corner.
San Ġwann won a free kick as Kieran Fenech handled the ball on the right flank and from the free kick by Zammit the ball was cleared to a corner and in another action Cody Grech was fouled in midfiled and Saliba saved the hard shot from Zammit’s free kick.

In the 58th minute Valletta restored parity. Chetcuti was fouled on the left flank and the same player’s free kick created havoc in San Ġwann’s area as after a shot by Desira was cleared to a corner the flag kick was taken by Buhagiar and Mackay scored with a hard rising shot from inside the area.

The pressure from Valletta resumed. Chetcuti released Spiteri in the area and a defender cleared the ball to a corner. Desira was fouled on the left flank and from Buhagiar’s free kick the ball was cleared away.

In the 77th minute Valletta came very close a winning goal when Pulis was fouled on the left flank and after Buhagiar floated a high ball in the area from the free kick the ball was cleared on the line from a shot by Matthias Mercieca. San Ġwann then mounted the last action before the final whistle as Zammit served Cody Grech in the area and Saliba foiled him with a timely sortie.