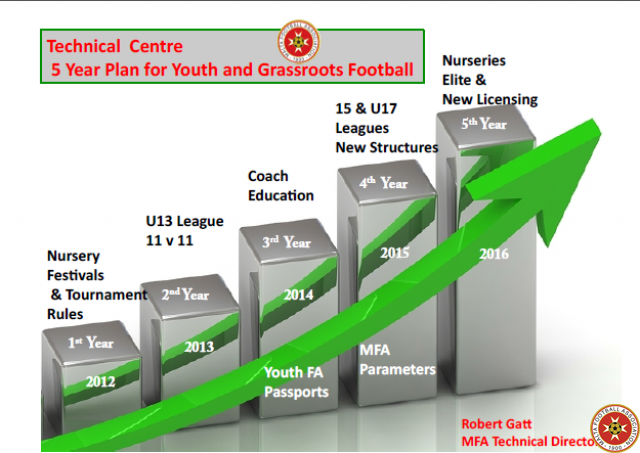 During a meeting organized by the Youth FA for all nurseries’ Head Coaches and Administrators, Robert Gatt, the MFA Technical Director, announced that after the past years restructuring of Youth Football, it is now time to reorganize the upgrading of the Local Youth Football Nurseries Licences A, B and C, and to further introduce a higher licence, the Elite Academy License. After his introduction, Mr Gatt went through a presentation that explained the criteria, demands and the check points which will eventually make a nursery eligible to upgrade its licence to an Elite Academy License.

As the level requested to obtain such a license is demanding, the Technical Centre plans to start a pilot project on the Elite Academy License.

The timeline leading to the completion of the pilot project is presented below:

By mid-March 2016:  The Technical Centre will accept application from Local Nurseries who potentially can aspire to reach the requested standards. After rigorous short listing, a maximum of 10 applications will be accepted.

March to May 2016: Meetings with head coaches and administrator of nurseries (10 or less) who will apply and eventually accepted, will take part in the pilot project. The meetings, which will take place at the Technical Centre, will discuss in detail the demands and eligibility. The meetings will be attended by representative/s from the Technical Centre, the Youth FA, the MFA Youth and Grassroots Committee and the MFA Licensing Manager.

June 2016: Conclusions of meetings will be referred to the MFA Youth and Grassroots Committee.

September 2016:  Start of the Pilot Project which will go through all the football season 2016-7. From the shortlist of the 10 nurseries who would have manifested their interest and applied to take part, a further shortlist will be compiled to bring the number to 5. Throughout the season 2016-7, these 5 nurseries will be audited by the MFA on various aspects.

End of Season 2016-7: Conclusions of the Pilot Project will be referred to the MFA Executive Committee.

Season 2017-8: Before the start of this season it is planned that the new Youth Football Licencing Regulations will be upgraded.

The presentation can be downloaded from the link below: