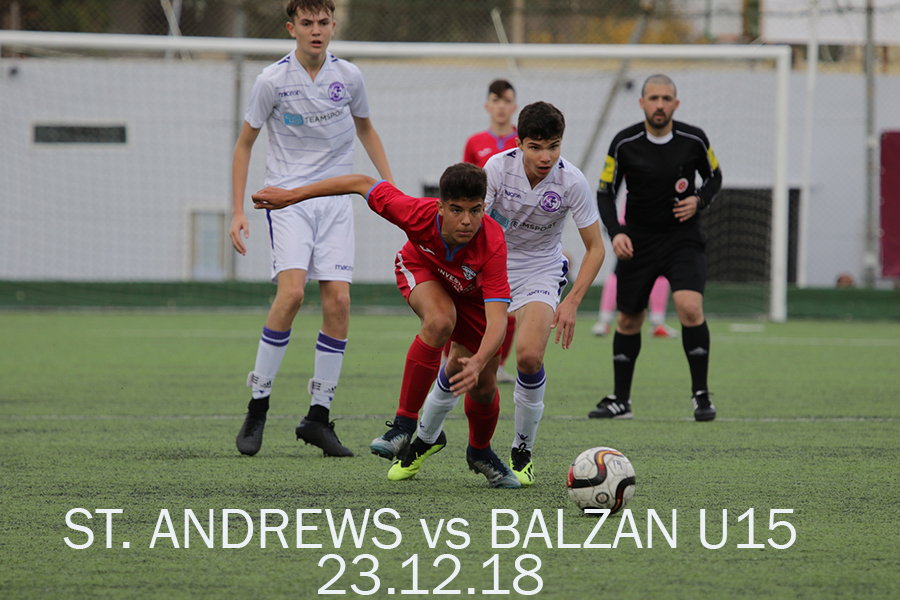 The Saints dominated the proceedings throughout the  whole 70 minutes of play by creating more actions than Balzan as they threatened from the very first whistle. Luca Zammit served Mattias Ellul with a cross pass from the left flank and a defender foiled him with a timely clearance. A well-taken flag kick by Nicholas Galea was headed away.

In the 6th minute St Andrew drew first blood as Zammit was served with a cross from the left flank and from the edge of the area he scored with a hard rising shot past Balzan keeper Matthias Borg, and in Balzan’s only action in the first period after 8 minutes after a flag kick by Liam Azzopardi, St Andrew keeper Kyle Barbara fisted the ball away to safety.

St Andrew resumed with their pressing up to the half time whistle. Mattias Ellul served Zane Falzon with a cross from the left flank and Borg saved his header from inside the area. James Pace released Ellul on the left flank who after advancing the ball was headed away following his high cross in the area. Falzon served Alexander Spiteri on the right flank and after his perfect cross in the area Timothy Cassar Torregiani failed to apply the killer touch from a very ideal position and Cassar Torregiani served Ellul with a cross-pass in the area and with an open goal at his mercy he skied the ball.

The first action after the restart was created by St Andrew as Spiteri released Ellul in the area and a defender cleared the ball to a corner and at the other end Gabriel Farrugia was fouled in midfield and after the free kick by Rees Demicoli the ball was easily headed away.

St Andrew soon regained the initiative and resumed with their pressing and also scored two more goals to put the issue beyond any doubt.

In the 57th minute St Andrew doubled their lead as substitute Andrew Borg pounced on a faulty clearance outside the area and scored with a hard rising shot and hardly a minute later the score became 3-0 when Falzon dribbled past an opponent on the right flank and served Galea with a cross in the area who scored with a header.