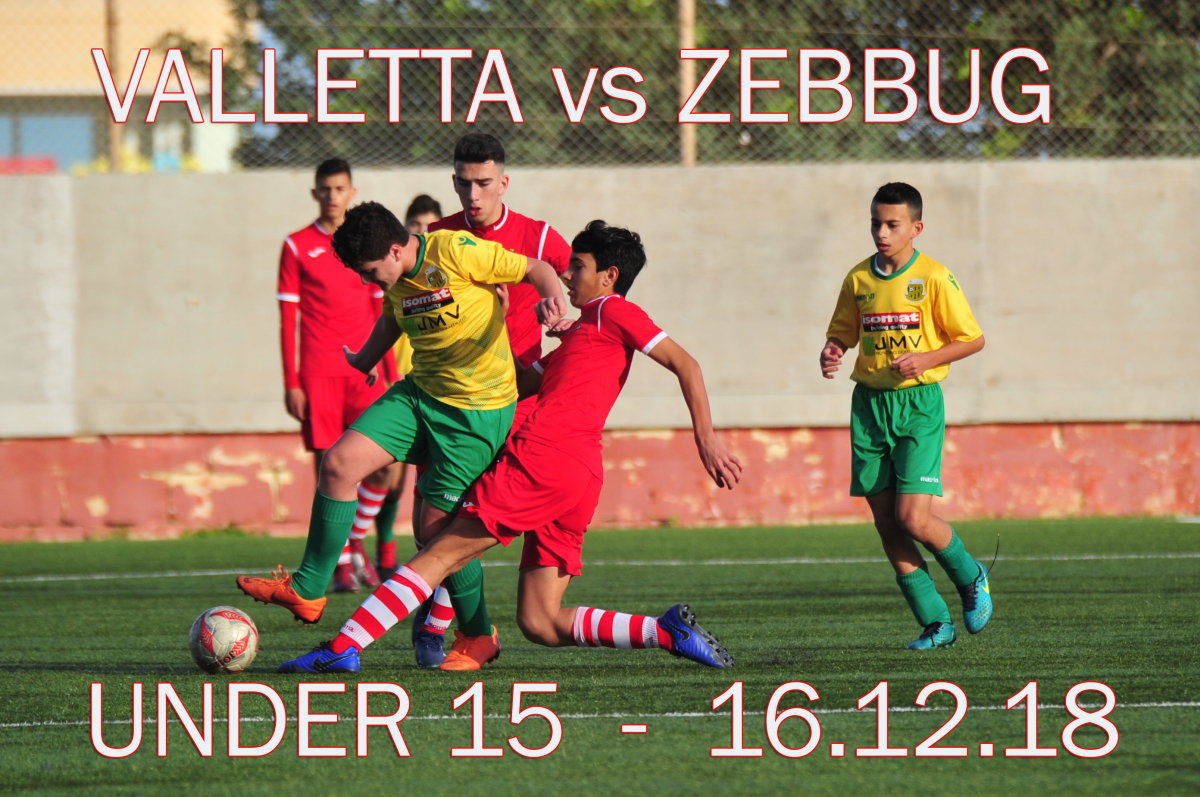 Under 15 KnockOut  Second Round

Valletta had an easy passage to the next round by beating Żebbuġ who offered a very feeble challange as Valletta dominated the proceedings throughout the whole 70 minutes.

The Valletta youngsters mad their intentions clear as they started on the offensive from the very first whistle. Gabriel Desira served Isaiah Micallef with a through ball just outside the area and Żebbuġ keeper Jake Vella came out of his charge to kick the ball away.

The first goal was scored after 6 minutes when Denzel Formston pounced on a faulty goal kick and after entering the area he square-passed the ball to Micallef who scored with a low shot past Vella and four minutes later the score became 2-0 as Amir Amhamed released Gabriel Desira on the left flank and as the latter served Micallef with a cross in the area he netted with a rising shot.

The pressure from Valletta resumed as they added two more goals between the 14th and 17th minutes. Neil Cacciatolo served Jake Spiteri on the right flank who then crossed the ball to Jeshua Chircop in the area and scored with a rising shot and Spiteri was fouled on the right edge of the area and following the free kick by Miguel Azzopardi, Micallef scored with a low drive from inside the area.

Two more actions were created by Valletta. Azzopardi released Micallef on the left flank and after crossing the ball in the area there were no takers to apply the killer touch and Amhamed served Micallef in the area and Vella foiled him with a timely sortie.

The score became 5-0 in the 28th minute as after a run down the right flank by Cacciatolo he served Formston with a cross in the area and he scored with a low drive.

Just before the break Żebbuġ created their only action as they won a corner kick which was taken by Nathaniel Fenech and the ball was easily headed away.

The first action after resumption was created by Żebbuġ when substitute Leon Desira was fouled outside the area and from the same player’s free kikc the ball was blocked by the defensive barrier and cleared away.

All the actions up to the end were created by Valletta. Substiute Klose Azzopardi Conti entered the area after dribbling past two opponents and a defender cleared the ball to a corner and after the same player’s flag kick Vella saved a low shot by substitue Aidan Portelli. Azzopardi served substitute Javier Farrugia with a through ball on the left flank and he missed the far post as he tried his luck from the distance.

A flag kick by Farrugia was cleared to another corner and Azzopardi Conti served Azzopardi with a short pass from a corner kick outside the area and he drove slightly over the bar.