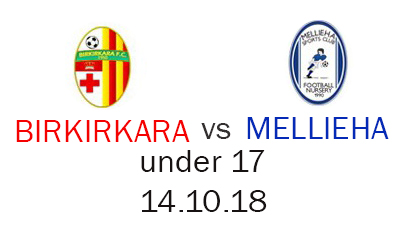 The final scoreline clearly indicates that Birkirkara had no difficulty in beating Mellieħa as they dominated the procedings throughout the whole 90 minutes. They are now joint leaders with Paola Hibs on 7 points from 3 games. A deciding match between Birkirkara and Paola Hibs will be played to determine the Group Winner who will eventually compete in Section A and the loser in Section B during this season.

Birkirkara commenced their pressing from the very first whistle. Calvin Mallia dribbled past an opponent on the right flank and from the edge of the area the ball missed the far post from his low cross-shot.

In the 10th minute they forged ahead when Owen Sciberras served Andrew Messina with a through ball who after entering the area netted with a hard low drive past Mellieħa keeper Aidan Borg Lupan.

Two more actions were created by Birkirkara. Mallia released Messina on the right flank and after his low cross in the area a Mellieħa defender back-passed the ball to his keeper and the danger was averted and after a left flank cross by Jacob Bonello, Adam Camilleri missed the bar by inches with a lob and hard drive from outside the area, and in a Mellieħa action Miguel Camilleri was fouled in midfield and the ball was easily cleared away from the free kick by Mark Vassallo.

Between the 24th and 29th minutes the Stripes scored two more goals. Mallia dribbled past an opponent on the edge of the area and scored a beauty with a high and curling shot and after a choral move between three players as Camilleri set Braydon Farrugia through on the right flank who then crossed the ball in the area and Angelo Migliore breasted the ball into the net.

In a rare Mellieħa action Keene Muscat was fouled just outside the area and Stripes keeper Wayne Deguara easily saved on the free kick by Daniel Micallef.

Five minutes before the break the score became 4-0 when Nikolai Farrugia Cross was fouled on the left flank and following the free kick by Glending Farrugia, Camilleri scored with a tap-in from inside the area.

Just after the restart Birkirkara won a flag kick on the left flank and after the cross by Messina, Borg saved a close-range shot by substitute Dejan Bogdanovic, and in the 56th minute they scored a fifth goal by Messina who scored with  a high drive after entering the area and dribbling past two opponents in the process.

The pressure resumed. Messina entered the area after dribbling past two opponents but was crowded out by another two defenders. Farrugia served substitute Miguel Abela with a square pass outside the area and Borg saved his distant ashot.

In an action by Mellieħa Miguel Camilleri served Mark Vassallo with a through ball inside the area and Deguara saved his low drive.

Birkirkara kept trying for more goals. Farrugia Cross out-sped an opponent on the left flank and after his perfect high croos in the area Messina failed to get his head to the ball to apply the killer touch. Abela was then fouled on the right flank and the free kick by Farrugia Cross created havoc in Mellieħa’s area and the ball was cleared away.

Two more goals were then scored between the 86th and 88th minutes for a final score of 7-0. Messina served Farrugia Cross on the left flank who served Abela with a cross outside the area and he scored with a hard low drive and Messina released Farrugia Cross in the area and after he was pushed he made no mistake from the resultant penalty.