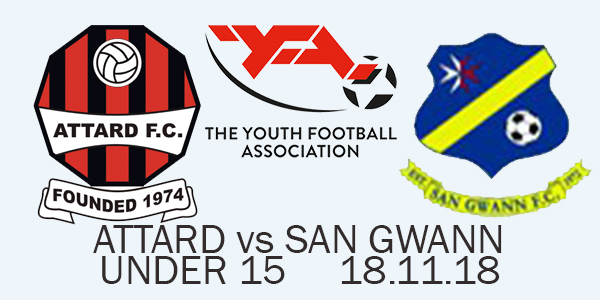 Under 15 Knock Out First Round

San Ġwann had a very easy task to progress into the next round of the competition after beating Attard in a one-sided game.

San Ġwann applied the early pressure. Jake Micallef dribbled past an opponent and Attard keeper Isaac Abela saved his distant shot. Aiden Vella served Benjamin Hili with a high cross in the area and he missed the upright with his header and Hili was then fouled on the right flank and after the free kick by Micallef, Abela saved a close-range shot by Matteo Tanti.

In the only action by Attard in the 19th minute Miguel Curmi dribbled past two opponents and served Kyle Zahra wtih a through ball in the area but he missed the upright.

In the next action by San Ġwann in the 22nd minute they opened the score as after a flag kick by Vella, Hili netted with a header and they doubled their lead four minutes later when Hili served Vella with a cross in the area and as he was tripped by a defender Micallef made no mistake from the spot with a hard rising shot.

Three minutes before the break the score became 3-0 when Vella dribbled past an opponent on the left flank and crossed the ball in the area to Hili who headed past Abela.

Very few were the actions worthy of note after the resumption which were all created by San Ġwann during which they managed to score three more goals between the 53rd and 64th minutes.